The contest “Koktem Shuagi” was organized by the Samruk-Kazyna Foundation for employees working in its member companies. According to the results of the vote, one of the leaders was Gulmira Ibragimova, a leading engineer for electrochemical protection of the branch of the UMG “Almaty” of JSC “Intergas Central Asia”.

The purpose of the contest was to identify and reward the most talented female employees who have distinguished themselves with outstanding professional qualities and achievements throughout their careers.

The whole difficult selection process was divided into several stages and lasted about a month. First, we chose 55 best employees who distinguished themselves in their work. After that, a quiz was held, which revealed 36 of the most erudite participants. The last stage was the online voting, which left 11 of the best representatives of the fund’s portfolio companies. 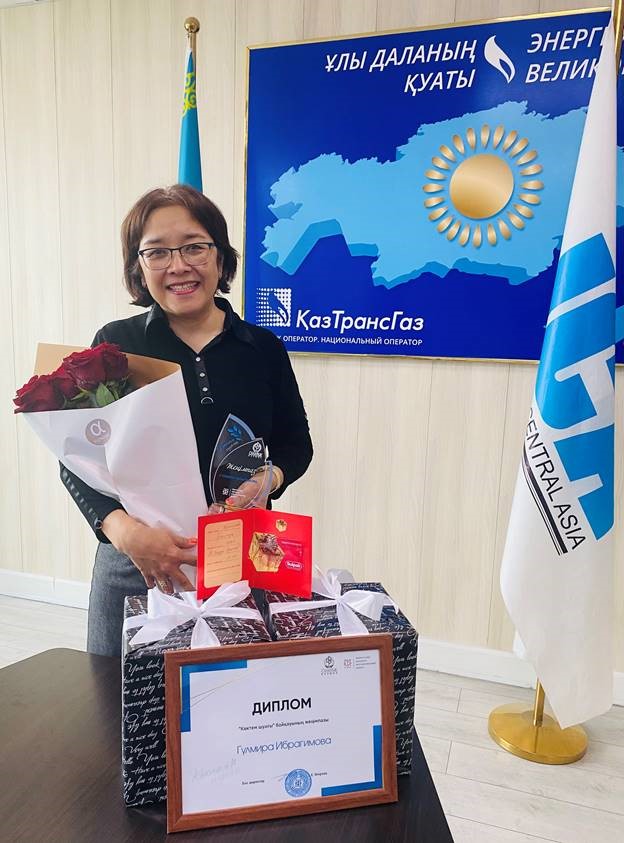 Gulmira Ibragimova, who became one of the leaders of the competition, has been working in JSC “Intergas Central Asia”, a subsidiary of JSC “KazTransGas”, for exactly 20 years. Prior to that, she graduated from the Institute of Mechanics and Energy at the Russian State Agrarian University. According to the winner, the profession of an electrical engineer is a family tradition.

Gulmira Ibragimova’s tasks include the organization of effective protection of main gas pipelines from underground corrosion. “I think that to a greater extent, this work is for men. But in the modern world, women work in many areas that have always been considered strictly male. And if you are confident in your own abilities, can be effective, fully cope with your duties and use all the strengths of your personality, then all roads, all professions are open to you! ” – Gulmira Ibragimova is convinced.

As Lyazzat Borankulova, Managing Director for Strategic Development of Samruk-Kazyna JSC, noted at the award ceremony, the fund’s management creates all conditions for career growth and increasing the potential of women. “The contest” Koktem Shuagi “is one of the examples of recognition of the merits and work of our employees, because the share of women in the total number of employees is 28% and has more than 83 thousand people,” Lyazzat Borankulova said.
Contacts
+7 (7172) 55-89-60 +7 (7172) 55-29-16
info@ktga.kz