Kazakhstan steps up work on decarbonization of transport 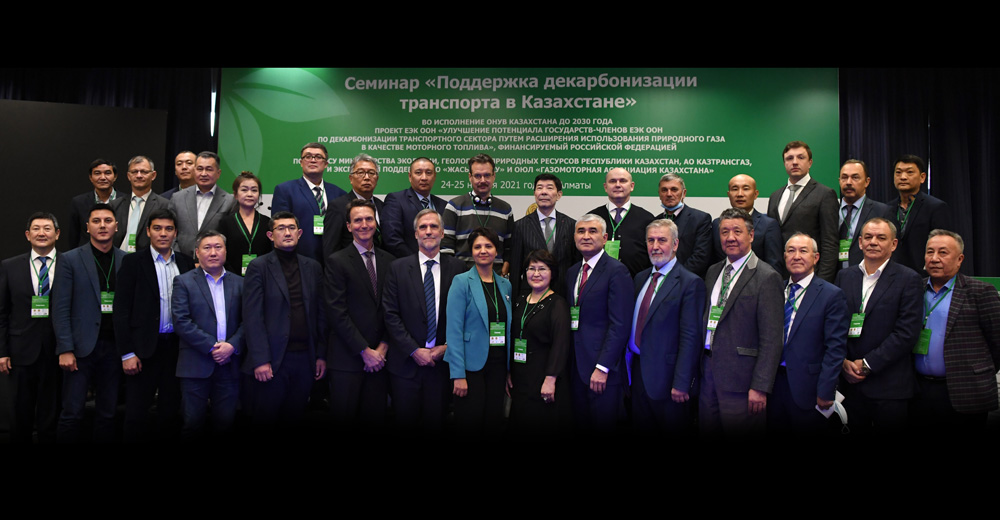 Almaty, November 24-25 , 2021. A seminar “Support for decarbonization of transport in Kazakhstan” is being held in Almaty on November 24-25, under the auspices of the UN Economic Commission for Europe. It was organized by the Ministry of Ecology, Geology and Natural Resources of the Republic of Kazakhstan, KazTransGas Onimderi LLP (a subsidiary of the National Operator KazTransGas JSC), Zhasyl Damu JSC and the Gas Engine Association of Kazakhstan.

The Government of the Republic of Kazakhstan fully supports the goals and objectives set at the Paris and Glasgow summits, as well as the UN Global Appeal to ensure Consistent Reduction of Greenhouse Gas Emissions and achieve carbon neutrality by 2060. This goal was set for our country by the President of Kazakhstan Kassym-Jomart Tokayev.

To date, one of the most effective directions in this process has been the transition of states to natural gas, instead of using gasoline and diesel fuel.

The main prerequisite for the transition to the use of natural gas as a motor fuel in Kazakhstan was a sharp increase in industrial consumption of petroleum products over the past decade. This is largely due to the increase in the fleet of vehicles and its deterioration. In order to avoid a possible shortage of traditional fuels in the future and not to load the ecology of Kazakhstan with harmful emissions, as well as to postpone the construction of a new oil refinery in Kazakhstan to a later date, a decision was made to diversify the motor fuel market for natural gas.

In 2018, the Government of the Republic of Kazakhstan adopted a resolution approving an action plan to expand the use of natural gas as a motor fuel. For a number of reasons, such as the coronavirus pandemic and the global crisis associated with falling oil prices, but mostly due to the disruption of synchronization of interaction between the gas and transport sectors of the economies and local executive bodies, the project was not fully implemented.

The main objectives of the seminar are to support the implementation of decarbonization programs of the transport sector in Kazakhstan by switching to compressed and liquefied natural gas, as well as gasification of the passenger bus fleet, railway locomotives, to intensify the construction of specialized gas stations in the country, especially on the international transport route “Western Europe – Western China”.

To do this, it is necessary to extend until 2030 the validity period of the “Action Plan for expanding the use of natural gas as motor fuel in the period 2019-2022”, previously approved by a government decree.

At the end of the event, it is planned to sign a resolution by representatives of government agencies, national companies, public organizations and private business.